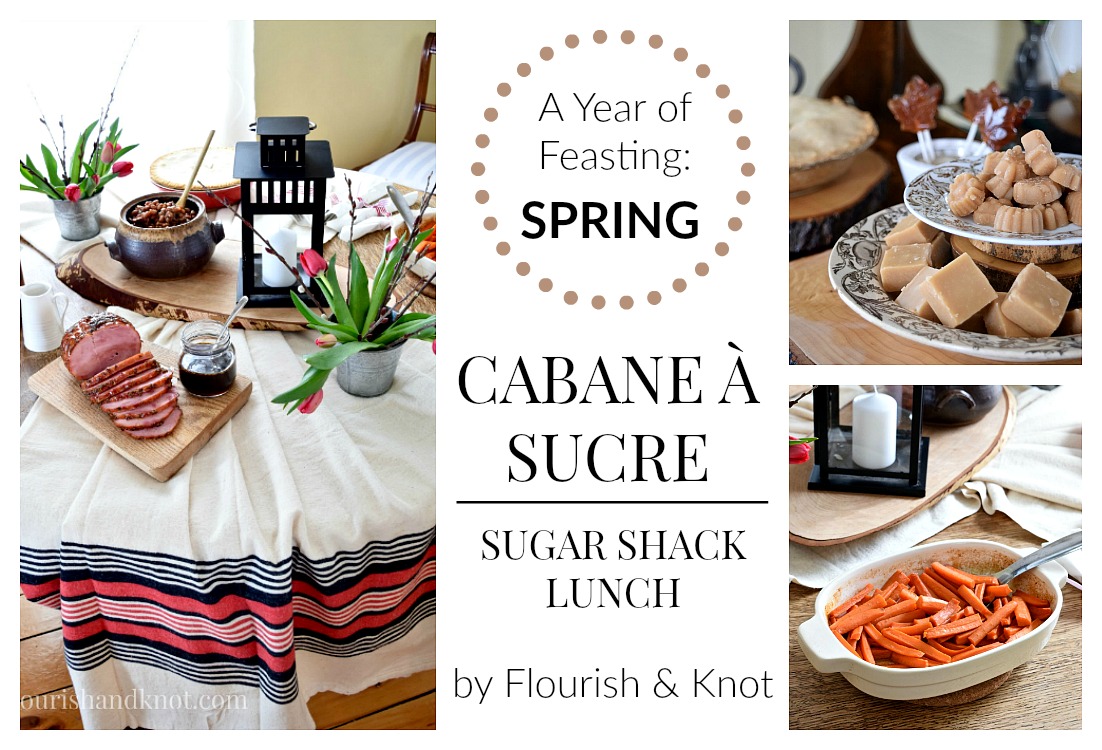 In springtime in Québec, Canada, we have one BIG tradition: “la cabane à sucre”, also known as the SUGAR SHACK! Cabane à sucre is a quintessential Québec experience (though I know that other parts of Canada also do the sugar shack thing), and I LOVE everything about it: the rich food, the great traditional music, the still-snowy landscape, the sleigh ride, and of course… the maple syrup.

When Danyelle of Life is a Party invited me to be a part of her series, A Year of Feasting, I jumped at the chance. This series is different because we are not only pulling together four tablescapes throughout the year, we are actually hosting real events! I love house tours and tablescape posts but they always feel a little hollow to me, mostly because the images are lacking, well, real life occupants.

I adore the entire premise of A Year of Feasting: host four different events throughout the year (one for each season), and blog about it. We are being encouraged to not only capture the food and the table settings and the details, but the people who attend and the overall vibe of each different gathering. This is totally up my alley!

Product for this post was sponsored by Giant Tiger. All opinions remain my own. Thank you for supporting Flourish & Knot’s partner brands. For more information, please see my Policies page.

To kick things off and introduce myself as the Québecoise contingent in our group, I decided to host a small, laid-back “cabane à sucre” (or sugar shack) themed lunch. Let me show you how I pulled together this meal à l’anciennne (in old-time style). I even have a traditional recipe for you to try out at home! 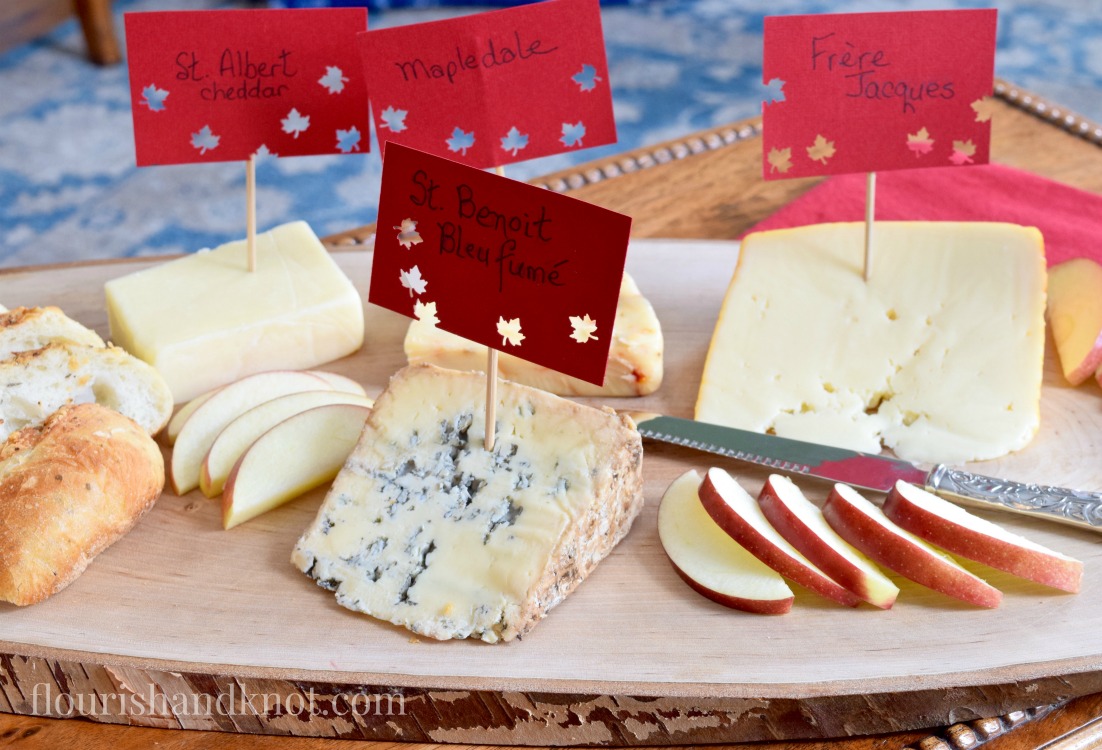 We started things off with a delicious (and very rich!) plate of Canadian cheeses, served with artisanal cheddar baguette and fresh apple slices. The smoked blue cheese from St. Benoit Abbey (here in Québec) was a particular hit! I served the cheese course with a selection of Québec craft beers. Two of our favourites are Raftsman and Maudite. Delicious! 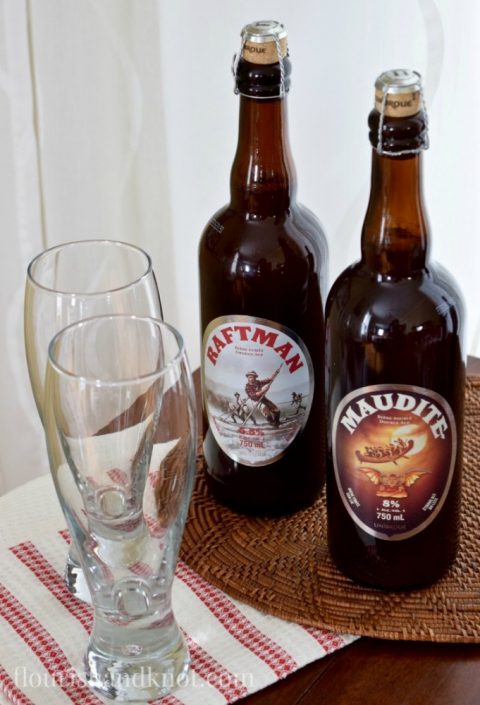 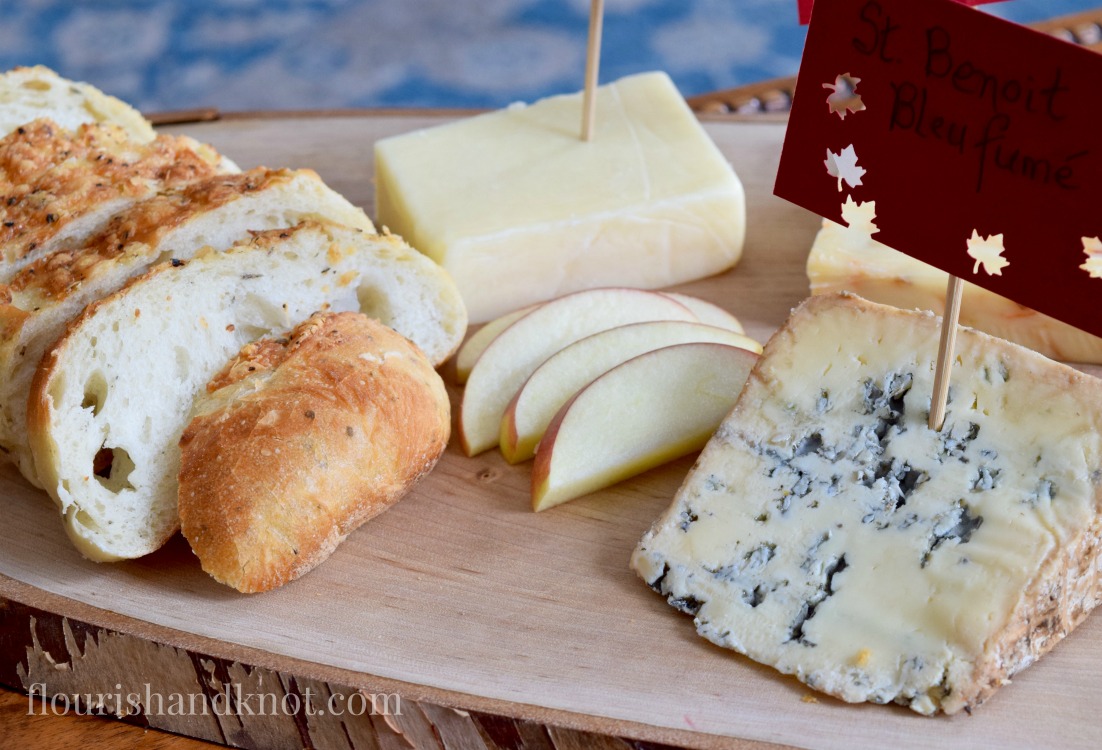 The meal itself was based on the traditional Québecois cabane à sucre menu, which includes baked beans, sausages in maple syrup, pea soup, and other hearty dishes. I decided to go a little lighter (but not by much!), and incorporated carrots and a green salad into my menu. My dad (who is an awesome cook) made both the tourtière (traditional meat pie) and a scrumptious apple pie for dessert. I’m lucky to have a family that cooks! 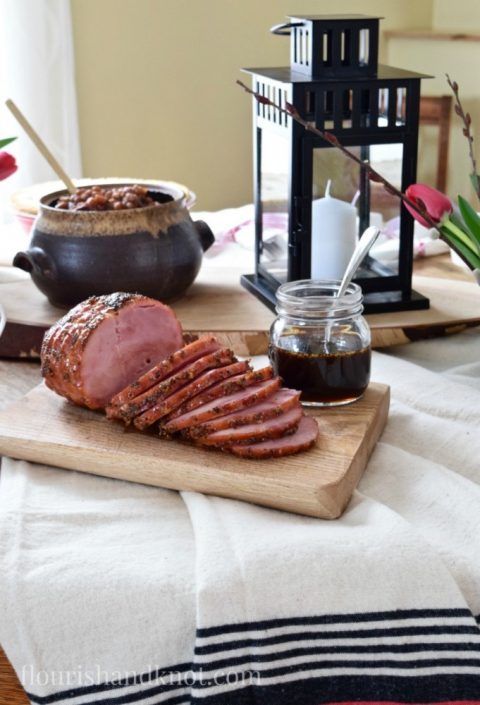 The maple-glazed ham was a hit with everyone, and was sooo easy to make. I served it with the thickened glaze. Yum! 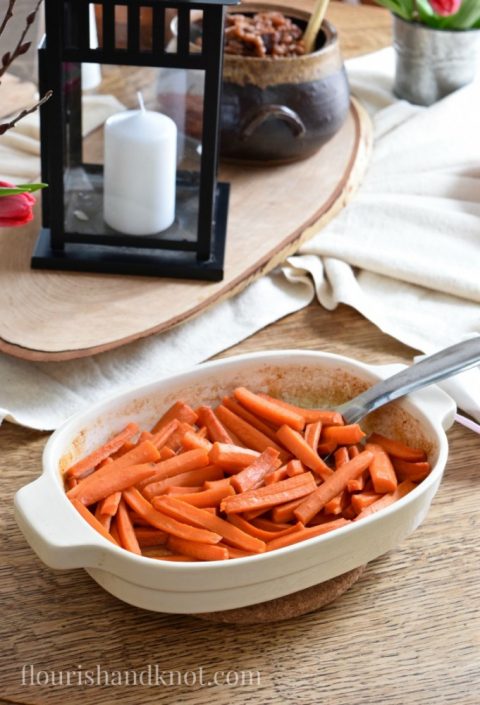 One of my favourite items I picked up at Giant Tiger was this lovely, simple ceramic baking dish by KitchenAid. It came in a set of five dishes and they were on special for just $20!! SUCH an amazing deal. I recently broke my favourite casserole dish, so this one will make for a sturdy, long-lasting replacement. I roasted some carrots with maple syrup (of course) and apple cider vinegar in the dish. They turned out perfectly and the dish cleaned up really well afterwards. 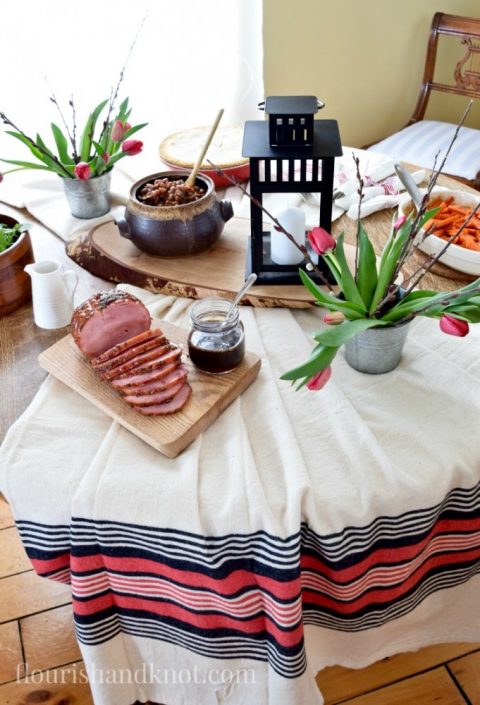 Another great Giant Tiger find for this meal was the graphic and fun throw that I used as a table cloth. It is made of flannel and I think it will be really cozy next winter… But for now it makes a great table accent piece! The bold stipes remind me a bit of a Hudson’s Bay blanket (another Canadian tradition). Red and white are, of course, Canada’s national colours, so this was the perfect piece for this event. (By the way, did you know that this year is Canada’s 150th birthday? You can expect to see more Canadiana on the blog!) 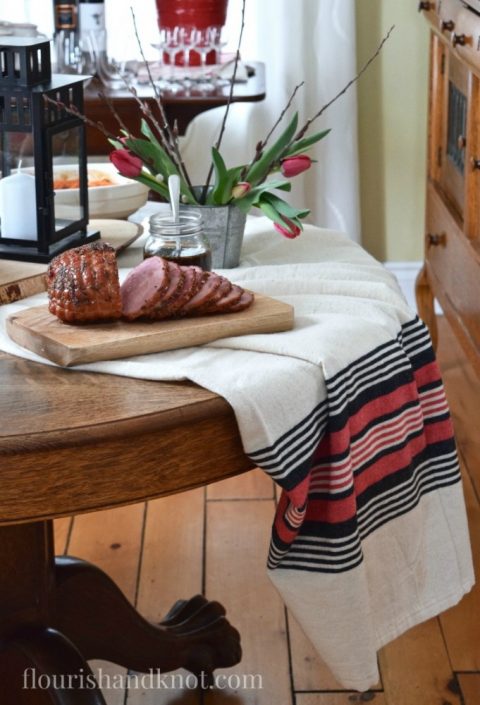 I added some red tulips and pussy willow branches in galvanized metal buckets, reminiscent of the buckets used to gather the sap from the maple trees at this time of year. A bold black lantern with lines that echo the stripes in the throw and one of my dad’s handmade wood chargers topped it off. 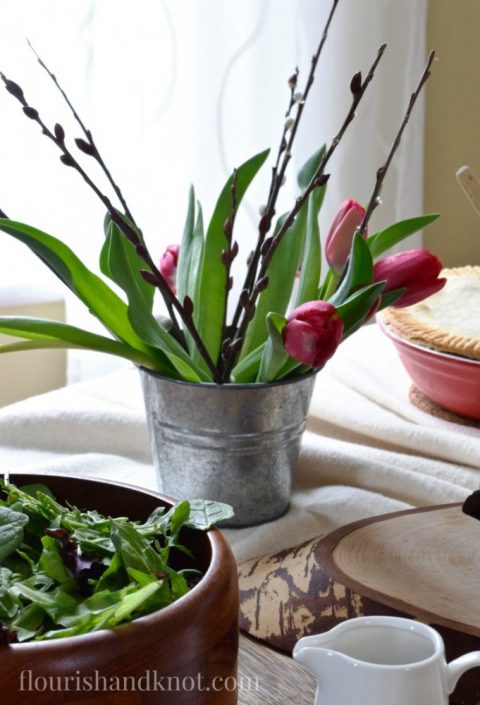 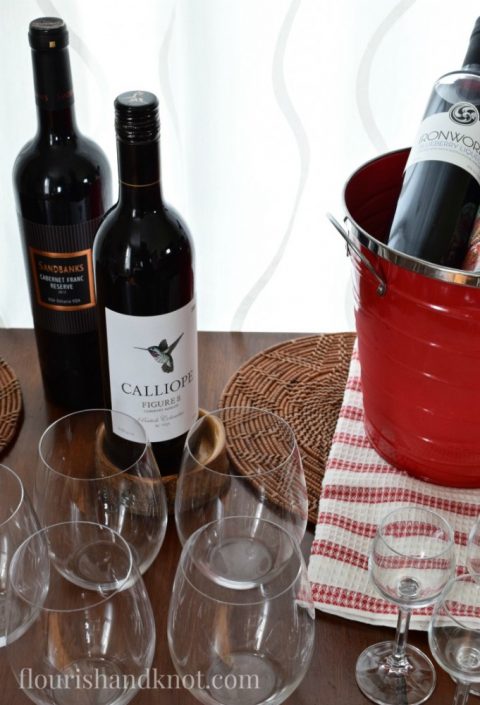 With the meal, I served two Canadian red wines (yes, we produce lots of wine – and some really good ones, at that!), Sandbanks and Calliope. Both were delicious and great with the tourtière and ham. 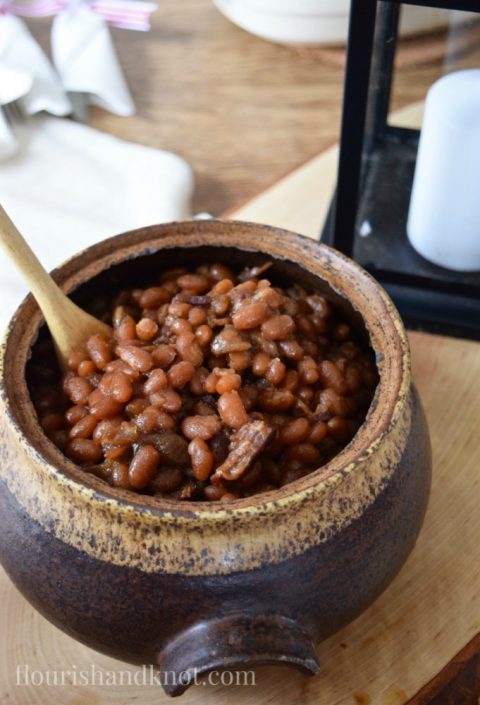 The pièce de résistance was the fèvres au lard (or baked beans), which I adapted from the recipe on the back of the bag of beans! *Shh! Don’t tell!* 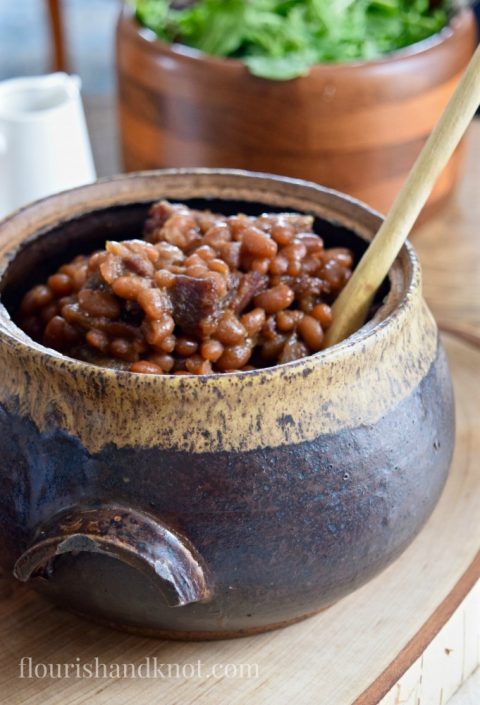 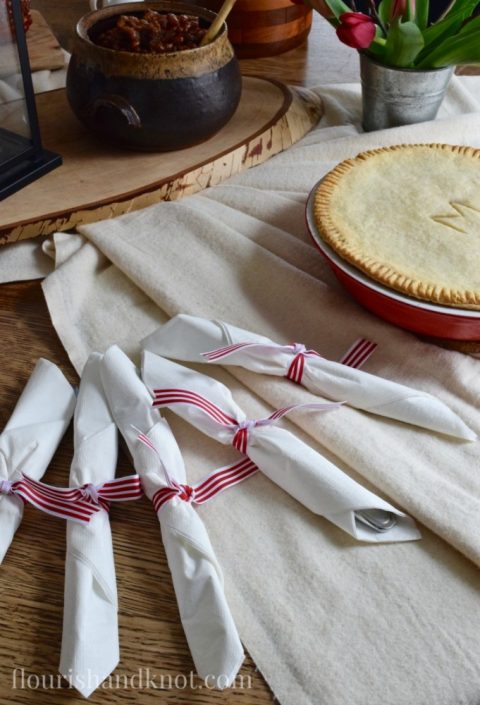 I tied the napkins and cutlery with jaunty red and white striped ribbon, another nod to our country’s colours. I added some sugar shack style to the living room area with a cozy throw and “Bonjour” (“Hello”) pillow, and some books of traditional Québecois folk music. 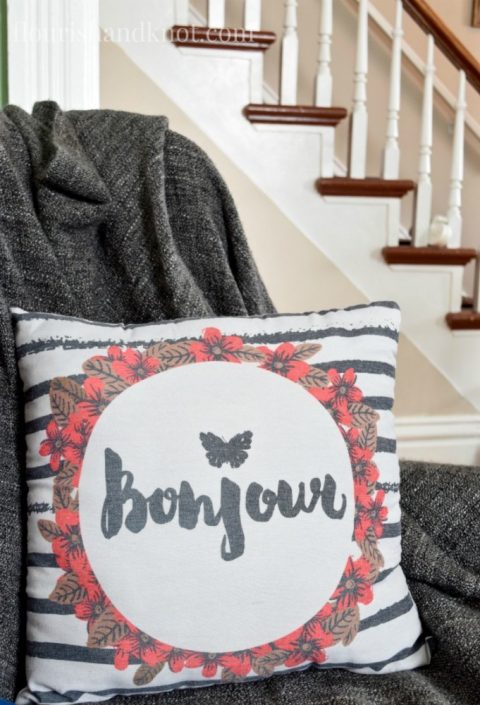 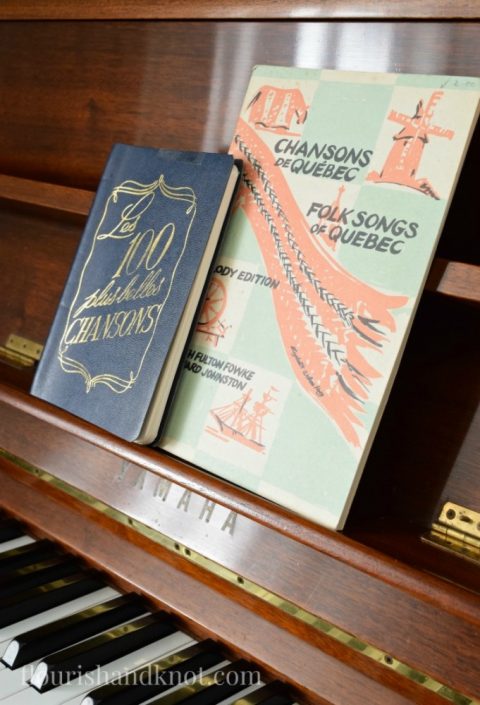 Dessert was a big affair, and I created a buffet of traditional Québec sweets, including Poudding chômeur (“poor man’s” or “unemployed man’s” pudding), apple pie (which my dad baked), and a bevvy of maple sugary candies and sweets. It was totally divine, but put everyone into a major sugar coma. 😉 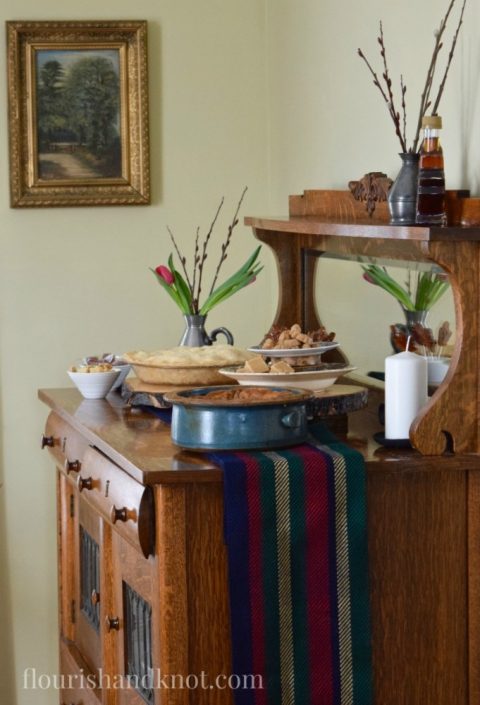 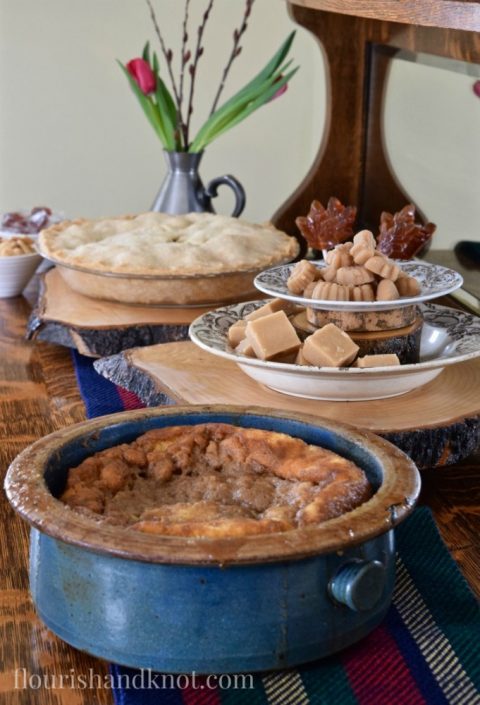 The runner I used on the dessert buffet is actually a “ceinture fléchée”, part of the traditional French-Canadian dress. 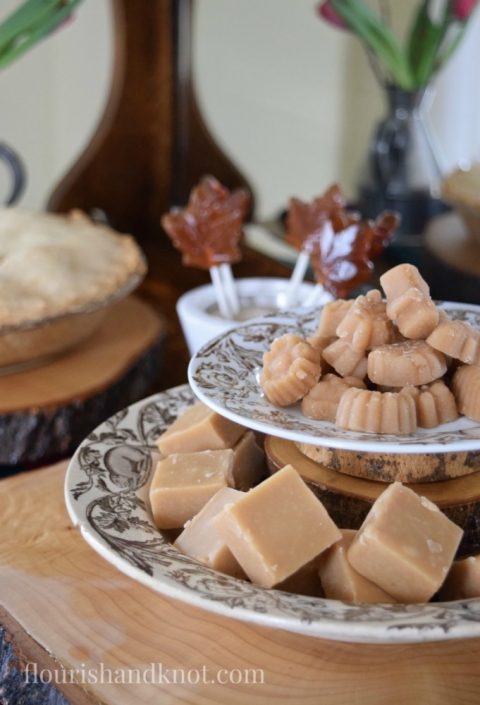 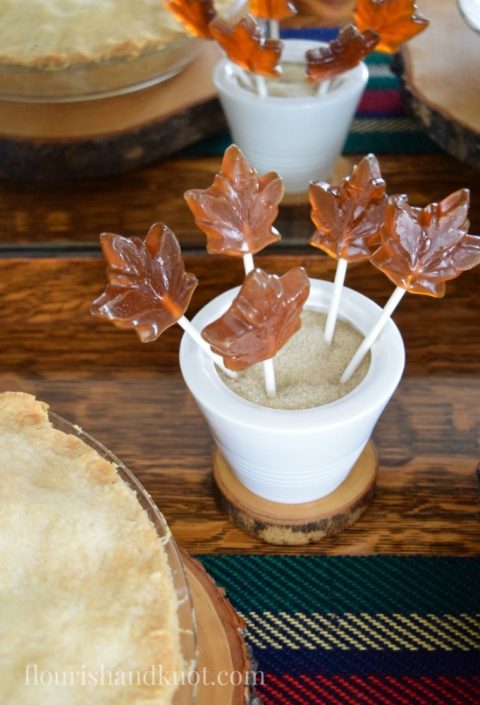 We were a small gathering, just myself and Erick, our daughter, my parents, and our friend Reg (whose wife Rosemary joined us later in the day). Everyone tucked into the meal with great enthusiasm! It was about the only time we all stopped gabbing! 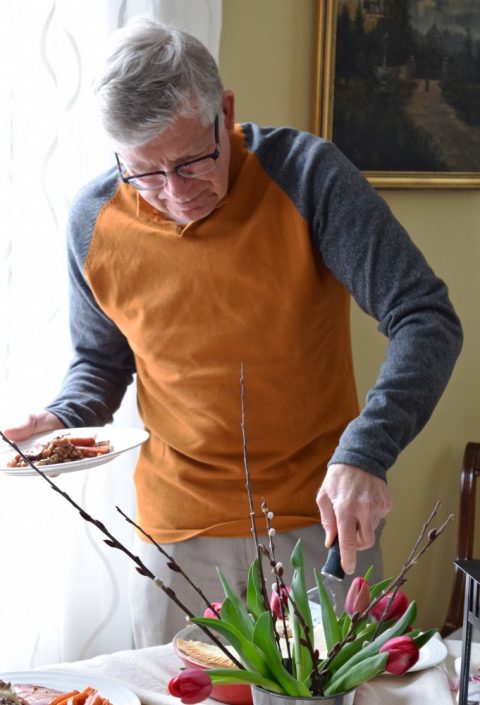 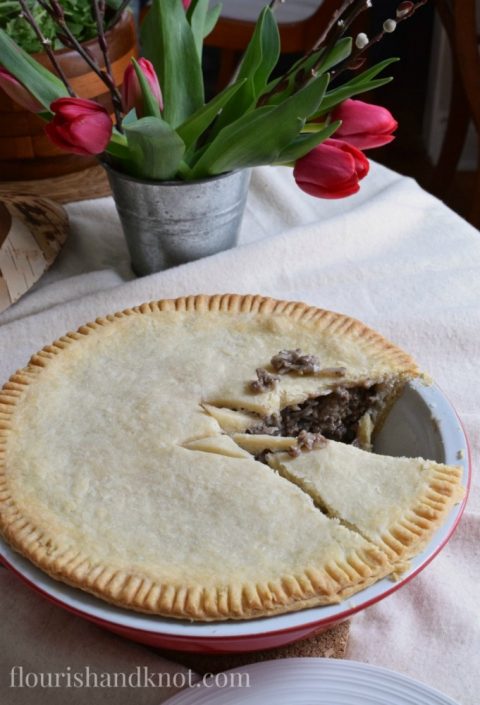 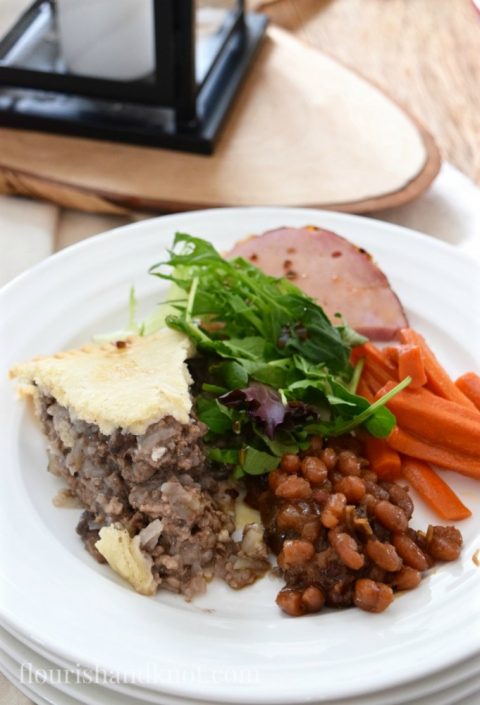 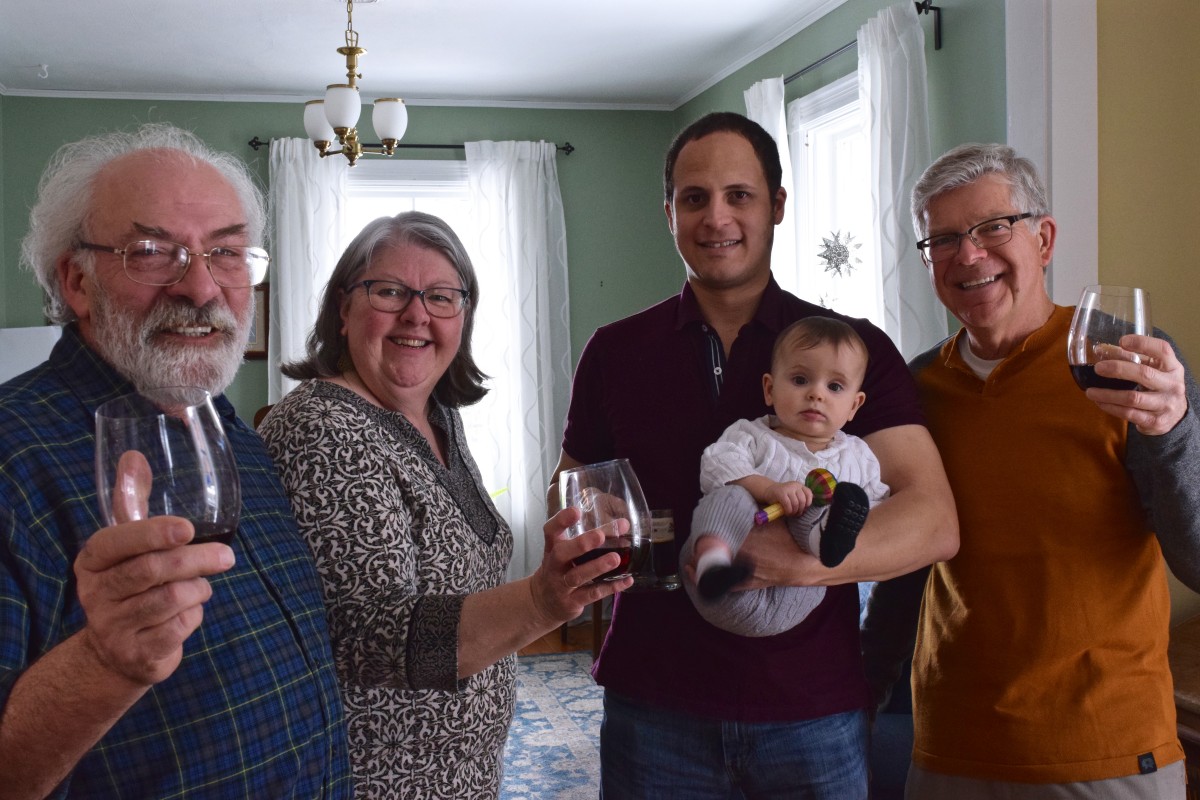 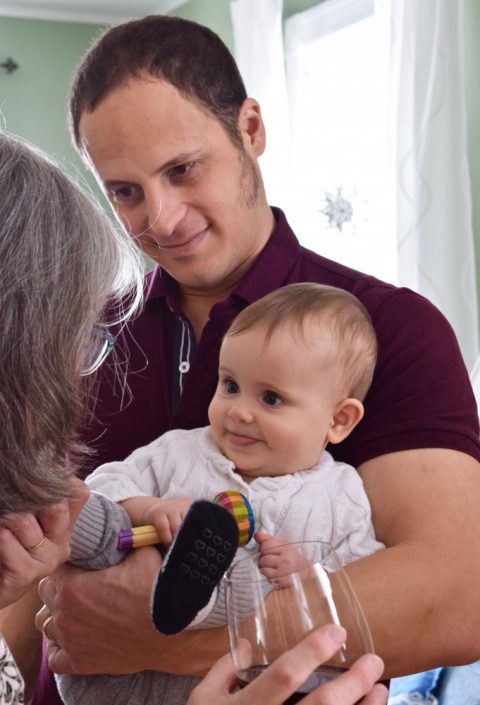 Of course we all know who the real star of the show was… Look at that little face! 🙂 She was everyone’s favourite guest.

I want to thank Giant Tiger for generously sponsoring many of the items I used as decorations and in the meal itself. (Did you know that GT has a wicked grocery section now?!) They carry lots of Canadian products, and I was able to get several of the cheeses I served, and all of the maple syrup, along with some other staple ingredients.

I’d love for you to pin this for later – don’t forget that recipe for baked beans! 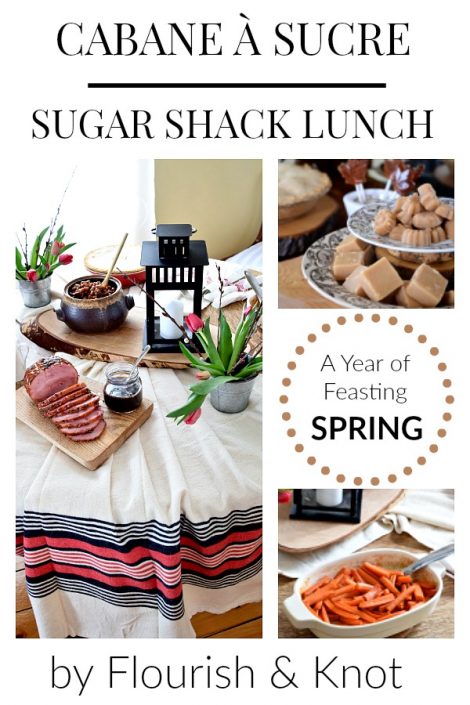 I hope you’ll give my baked beans a try, and maybe even host your own cabane à sucre-themed meal. The recipes are easy to find on the web, and there is a huge variety from which to choose. Now be sure to check out all these amazing Spring Feasts and get inspired to have your own #yearoffeasting ! 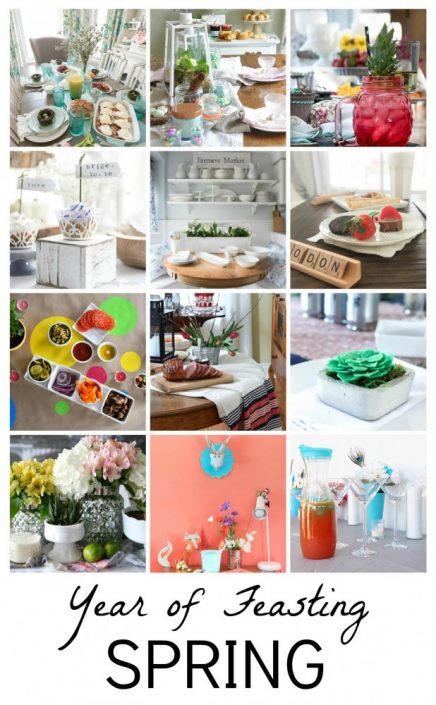 THE DIY MOMMY – LIFE IS A PARTY – VINYETE ETC.

AMIDST THE CHAOS – PMQ FOR TWO – THE DREAM HOUSE PROJECT

This website uses cookies to improve your experience while you navigate through the website. Out of these, the cookies that are categorized as necessary are stored on your browser as they are essential for the working of basic functionalities of the website. We also use third-party cookies that help us analyze and understand how you use this website. These cookies will be stored in your browser only with your consent. You also have the option to opt-out of these cookies. But opting out of some of these cookies may affect your browsing experience.
Enregistrer & appliquer